Bir Tawil is a 2000km2 tract of land between Egypt and Sudan which is not currently claimed by either country making it (formerly) terra nullius. It has been claimed now by a group of responsible citizens who aim to make it a glowing example of peace and justice in the world.
Number of registered citizens: 14 and growing.
Apply for citizenship today! 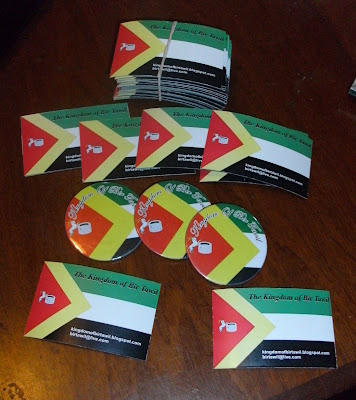 The economy of Bir Tawil continues to expand, as well as the promotion of its national symbols. We introduce our latest samples: refrigerator magnets and personal pins bearing our hallowed flag. Anyone desiring magnets may request them on this page, and present citizens may request one of the last few pins. These are all destined to become collector's items, so plan ahead.
Posted by Jorge at 9:24 PM 7 comments: 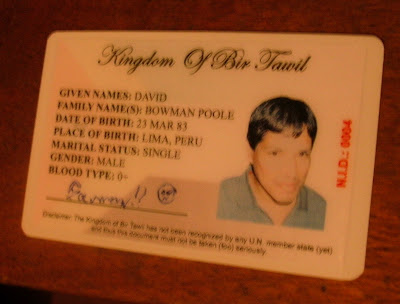 The Kingdom of Bir Tawil is pleased to announce that it has manufactured its first batch of prototype IDs. This constitutes an important step in our path towards recognition by peace-loving nations around the world. Once the design has been perfected, citizens may have them issued.
Posted by Jorge at 6:38 PM 1 comment:

Bir Tawil's condemnation of the deadly Israeli attack on a humanitarian aid flotilla this past May, along with the rest of the international community, has borne fruits: Israel has announced it will loosen the blockade it has imposed on the Gaza strip.

JERUSALEM (Reuters) - Israel said on Thursday it was easing a land blockade of the Gaza Strip that drew heightened international criticism after its deadly raid on an aid flotilla bound for the Hamas-run Palestinian territory.

For the full story click here.
Posted by Jorge at 4:11 PM No comments:

The Constitution of the Kingdom of Bir Tawil 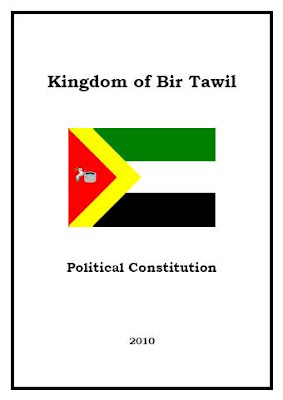 On Sunday, June 13th, the Council of Elders convened with King George Henry I at the Palace of Independence, and the following important decisions were made.
- After lengthy and thought-provoking debate, in which numerous viewpoints were expressed and wise improvements made, the Constitution received official approval. The Constitution shall be enforced as soon as it is officially sworn in, which shall take place in a nearby date. The Constitution is available for download here.
- Elder War, PhD. was selected as the chairperson of the Council and shall take the King's oath to serve, uphold and protect the Constitution.
George Henry I of Bir Tawil
Posted by Jorge at 8:23 PM No comments:

Condemnation of the actions of North Korea and Israel

To the international community:

In view of recent events, the Kingdom of Bir Tawil cannot abstain from expressing its concern and making known its position as a sovereign nation. The authorities of the Kingdom concretely refer to:

a) the sinking of the ROKS Cheonan while patrolling its national waters by a submarine of the Democratic People’s Republic of Korea on March 26, 2010 and

b) the violent boarding of a flotilla with humanitarian aid destined for Gaza while in international waters by the forces of State of Israel on May 31, 2010

We must hereby publicly condemn both actions as threats to world peace and urge all parties involved to work towards solutions that are fair and just.

The Council of Elders of Bir Tawil

The People of Bir Tawil

Minutes of the meeting with the Council of Elders

As there have been no challenges to these minutes over the course of the past week, they hereby become official and public.
King George Henry I
On May 1st, 2010, the Council of Elders convened with King George Henry I of Bir
Tawil at the Palace of Aurora. The following transcendent decisions were taken:

- The Council of Elders is to be a transitional organ of government. Its
decisions are to be taken by means of simple majority in votes. It delegated
power of drafting the Constitution to King George Henry I, while reserving the
power to make suggestions. The suggestion period shall last two weeks, and the
King will have an additional week to put it all in order and submit a
Constitution. Approval and enactment of the Constitution is to be up to the
Council of Elders. This shall be carried out via a Yahoo Group created by the
King. In order to make electronic decisions more expedient, it will be assumed
that Council members vote in favor unless they explicitly state their disfavor
within a week.

- The Council of Elders reviewed all the Royal Decrees enacted by King George
Henry I up to that date, with the following results:
RD#1 (Foundation): Approved
RD#2 (Flag): Modifications were proposed to the flag. Water is to be added to
the well, and a goat shall be rendered, who will attempt to drink the water.
RD#3 (Citizens): Approved
RD#4 (Renumbering): Approved
RD#5 (Validity): Approved
RD#6 (Monarchy): Modifications were proposed. Monarch may be vacated for
dereliction of duty and moral incapacity. Successor may be named from without
the Royal Family, but incorporated into it via adoption. Mechanisms shall be
adopted should the Monarch and heir die simultaneously.

- A parallel entity is to be created, which shall deal with the production,
distribution and commercialization of Bir Tawilean merchandise and products:
stamps, certificates, documents, mugs, T-shirts, etc.

I request any ammendments to these minutes before they become official in a
week's time.

George Henry I of Bir Tawil
Posted by Jorge at 4:25 PM 2 comments:

I hereby announce that the Council of Elders has been summoned. The Agenda shall be as follows:

Agenda for the first meeting of the Council of Elders

1. Opening speech by King George Henry I of Bir Tawil, in which he shall expound his vision for the kingdom, account for his Royal Decrees and commission the Council of Elders to organize the legal foundations of the state.

2. Opening speeches by the members of the Council of Elders, in order of their ID number, in which they shall put forward whichever thoughts they find pertinent to the foundation of the kingdom.

3. Discussion on the role, procedures and power of the Council of Elders.

4. Ceremonial handover of shared power to the Council of Elders.

King George Henry I of Bir Tawil
Posted by Jorge at 10:12 PM 1 comment: